India topped the list for the most internet shutdowns in 2020 globally for the third consecutive year, a new report by digital rights and privacy organisation Access Now said.

India leveraged blackouts to crush the nationwide farmer’s protest and the Kashmiris, the report said. It pointed out that India shut down the internet more than any other nation at 109 times out of a total of 155, recorded worldwide. India was followed by Yemen with six instances.

According to a new report by Access Now, a global non-profit that works on digital rights and online freedom, around 70% of cases of internet shutdowns globally happened in India in 2020, with shut down of the internet in Indian Occupied Jammu and Kashmir (IIOJK) roughly once every two weeks. 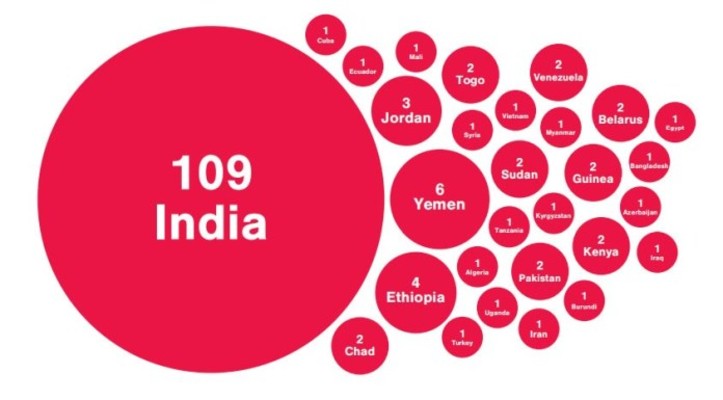 The report triggered a strong reaction from freedom of speech supporters and demanded an explanation from the government with the hashtag #modiji_jawab_do, #FreedomOfSpeech, and #InternetShutdown.

“In IIOJK, the administration, which is directly supervised by India’s federal government as a union territory issued internet shutdown orders every two weeks in 2020 despite concerns from doctors, journalist associations, and other residents on the additional challenges it posed to Covid response,” the report said.

India imposed the lion’s share of internet shutdowns in 2020, topping the global shame list — just as it did in 2018 and 2019. The government shut down the internet at least 109 times. While this figure is lower than the totals in the previous two years, India had instituted what had become a perpetual, punitive shutdown in IIOJK beginning in August 2019. Residents in these states had previously experienced frequent periodic shutdowns, and in 2020 they were deprived of reliable, secure, open, and accessible internet on an ongoing basis.

The report stated that in January 2020, the IIOJK government did restore 2G internet connection, but it was useless. No one in IIOJK, except in Ganderbal and Udhampur, had access to 3G and 4G mobile internet, and there were numerous times in 2020 that the government cut off access even to 2G internet. 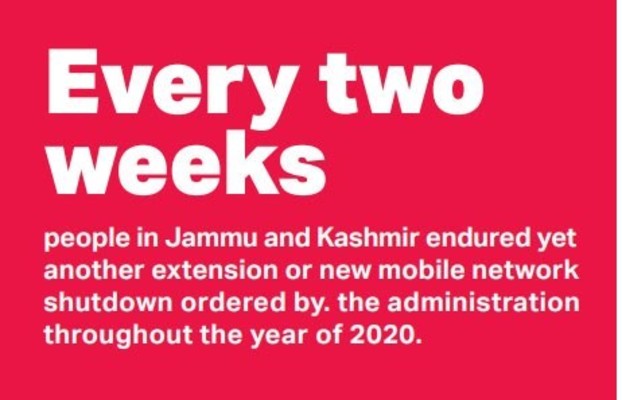 “In some instances, when the inspector general of police for IIOJK shuts down 2G mobile internet, which is later confirmed by the home department of the government of IIOJK, they also suspend voice calling and SMS services, leaving people in the area cut, including journalists, entirely off the grid and unable to access alternative means of communications,” the report said.

In places like Anantnag, authorities repeatedly turned off 2G internet citing “the misuse of data services by anti-national elements.” In most cases, when people are cut off from 2G in IIOJK, there are security incidents between the military and armed groups.

“It is alarming that the world’s largest democracy – India – continues to be the biggest instigator of internet shutdowns in the world,” Raman Jit Singh Chima, Senior International Counsel and Asia Pacific Policy Director at Access Now said.

“We’ve lived through targeted blackouts in IIOJK for years, and watched shutdowns spread to every part of the country, and increasingly being used to target peaceful protestors and hide the actions of government authorities.”

“People in India live in precarity. This is not on par with international human rights standards, nor is it in line with the progressive facade of the Union Government’s Digital India mission,” Raman Jit Singh Chima said. 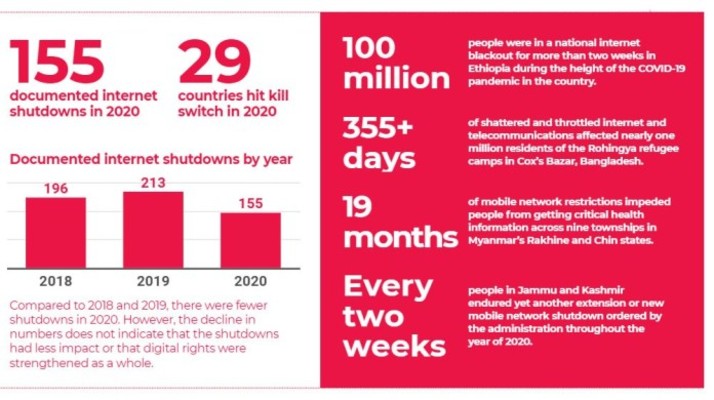 Access Now said that “conflict” topped the reason for shutting down the Internet in other parts of the world, followed by elections, protests, exam cheating, and political instability.

According to the data collected for the report, there were 28 complete Internet shutdowns where authorities disabled both broadband and mobile connectivity.

The people most hurt by shutdowns in 2020 were those already facing repression, silencing, and marginalisation. They include Rohingya Muslims in Myanmar and Bangladesh, Belarusians fighting for their democracy, and Ethiopians, Yemenis, and Kashmiris caught in the crossfire of communal violence and active armed conflict.

According to the report, the internet blackouts not only threaten people’s lives during Covid-19 and block protests and organising, but they also dismantle pathways for getting help. Many who were targeted by shutdowns in 2020 remain in danger today.

Access Now earlier also expressed extreme concern over the alarming new powers the Indian government has granted itself for increased control over the content on social media platforms. India has amended a set of rules — for immediate publication and implementation — to change how it can regulate internet intermediaries such as social media platforms, and online media sites.

This report has been built on the internet shutdown data collected by the #KeepItOn coalition, a group of 243 organisations from 105 countries that works to end internet shutdowns around the world.